Applied StemCell can generate a custom conditional knockout mouse model specific to your needs using CRISPR/Cas9 or other suitable gene editing techniques to insert the 5’ and 3’ flanking LoxP sequences into the endogenous locus of your gene of interest. These conditional knockout mice can be bred with thousands of commercially available Cre-deleter mice or custom engineered Cre-expressing mice to generate your mouse model with precise control over where and when your gene is knocked out.

Site-specific gene editing technologies have paved the way for novel genetically engineered mouse models with complex gene modifications that accurately represent human genetics and disease pathology. One such mouse models is the Conditional Knockout mouse model where a gene knockout can be limited to a particular tissue or a specific developmental time of the animal. This allows for better control of the gene of interest and such conditional knockout mice overcome limitations posed by constitutive knockout models such as embryonic lethality, undesired phenotypes and compensatory mechanisms. One of the most used conditional knockout method is the Cre- LoxP system, in which a gene of interest (targeted exons) is flanked by two 34-bp LoxP sequences (also called floxed alleles) at the desired genomic locus (Figure 1). The LoxP sites serve as a target for the Cre-recombinase, which catalyzes deletion of the floxed (Figure 2) exon(s). 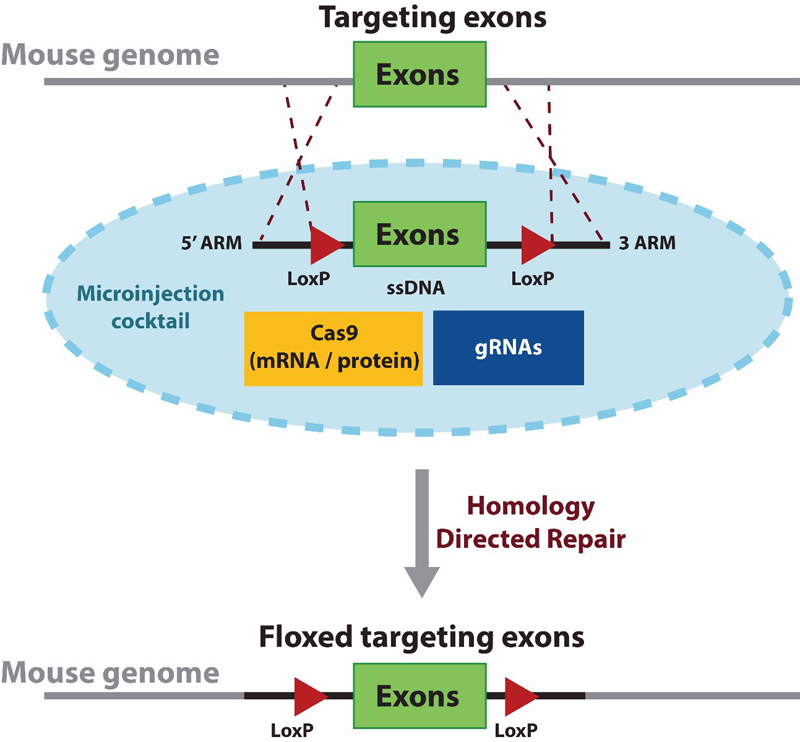 Figure 1. The schematic describes the first stage in developing a conditional knockout mouse model using CRISPR to generate a floxed (LoxP flanked exon) mouse. A single stranded donor DNA (ssDNA) is used for delivering the floxed targeting exons to replace the wild type form. The donor contains two LoxP sequences flanking the targeted exon(s) along with 5' and 3' homologous arms for directing a site-specific homology directed repair. The donor ssDNA is delivered along with Cas9 (mRNA or protein) and validated gRNAs via microinjection.

Figure 2.  Crossbreeding the CKO mouse with a Cre-recombinase expressing mouse. The Cre expression is driven by a promoter of choice: a tissue specific or ubiquitous promoter. The expressed Cre recombinase deletes the floxed exon(s) in a tissue specific manner thereby causing a frameshift in downstream sequence.

Applied StemCell has >11 years’ experience in mouse model engineering and is one of the earliest service providers of CRISPR/Cas9 technology. We can generate your CRISPR conditional knockout mouse model that suits your project(s) needs.