Cell and Gene Therapy (CGT) drugs have their unique mechanism of action and require a more tailor-made approach for drug development and regulatory approval. Starting from custom cell line and animal model generation for the targeted disease, ASC’s multidisciplinary team of experts can develop preclinical assays to determine efficacy, pharmacodynamic, dose-ranging studies, biodistribution, and develop other IND-enabling assays to measure potency (AAV potency, DNA/ RNA/ protein levels) and toxicity of the drug in multiple species samples including NHPs, immunogenicity of the drug, and more. We will work with you every step of the way including pre-IND meetings with the FDA/ respective regulatory bodies to develop the right assay matrix for your CGT candidates.

Follow-up from your IND-enabling preclinical assays to our CMC consultation and support services for your non-clinical and clinical design, manufacturing and quality control for your biotherapeutics.

Clinical trials in gene and cell therapies have advanced rapidly in the past decade, reflecting significant advances in scientific innovation with better translation to clinical settings. Assessing the growth in this area of therapeutics, FDA anticipates that by the year 2025 they expect to approve 10-20 gene and cell-based therapy products a year.1 To date, majority of the gene therapies involving delivery to in vivo and ex vivo target cells (Ex. CAR-T), have utilized recombinant viral vectors such as adeno-associated virus (AAV), adenovirus, lentiviruses, vaccinia virus, and retroviruses. As with any therapeutic product developed for use in humans, an initial set of preclinical and non-clinical data aimed at assessing the risks/ safety and benefit/ intended efficacy profile is required. Preclinical (or non-clinical) studies that are conducted in a variety of in vitro (human cell lines) and in vivo (animal) models relevant to the targeted human system or disease, to gather as much safety and efficacy information can maximize the chance of success in human clinical trials.

In particular, gene therapies are highly specific to humans and therefore preclinical testing in human-relevant system is critical. And for virus delivery of gene therapy products, tissue infectivity (viral biodistribution of recombinant viruses) and viral shedding are assessments required by regulatory authorities.2 ASC’s genome editing experts can equip you with clinically relevant cell line or animal models as well as provide you with the technical expertise in designing preclinical assays for your gene therapy programs, such as assessing the right serotype of viral vector, biodistribution, viral shedding, virus titer (and dose determination), potency assays and more.

Figure. Knock-in abundance following CRISPR-SaCas9 genome editing at a specific genetic locus of choice in C57BL/6 WT mouse. Combined delivery of two recombinant AAV viruses containing the gene of interest and SaCas9-GuideRNA was applied at a total dose of 1.8E+11VG/Kg. To determine the knock-in abundance, two ddPCR primer-probe assays were used: the first assay includes a primer set that amplifies the target locus only following insertion (targeting the junction of insertion), and a FAM-labeled probe. The second assay, including a HEX-labeled probe, targets a reference region and is used to count all genome copies. KI abundance is calculated by the ratio of FAM-positive droplets (KI amplicons) to all HEX positive droplets (Reference amplicons). Gray droplets population includes droplet with no target sequence. KI% detected here is 10%.

Examples of Assay Development for a Recombinant Adeno-Associated Virus 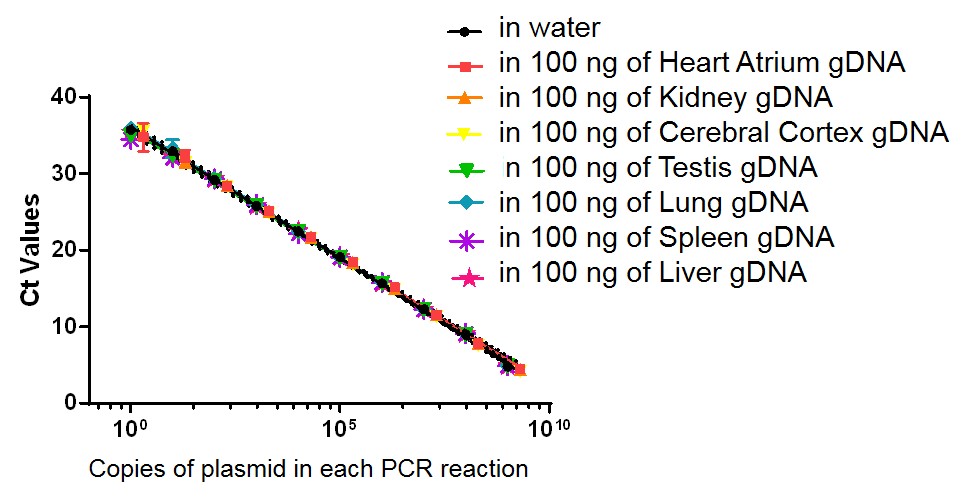 Figure. Standard curve developed to measure viral biodistribution for a recombinant adeno-associated viral (AAV) vector in mouse tissues. Genomic DNA (gDNA) sample from various tissues (heart, kidney, cerebral cortex, testis, lung, spleen, and liver) was extracted from PBS-only injected C57BL/6wild type (WT) mouse tissues, and added to a serial dilution of plasmid containing the gene of interest. Quantitative PCR (qPCR) was performed to generate a standard curve for the biodistribution of the gene of interest. Assay sensitivity: ≤50 copies of plasmid per 1 μg gDNA from mouse tissue. Note: No signal was detected in all negative controls (non-plasmid samples with and without tissue gDNA). 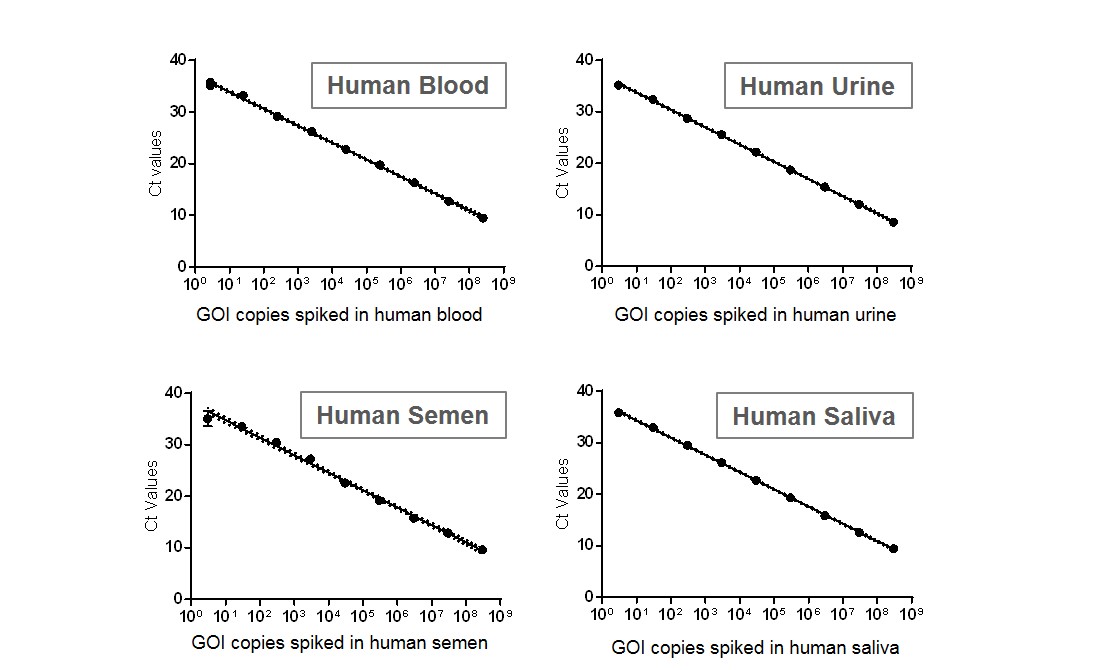 Droplet digital PCR (ddPCR) is a highly precise method for nucleic acid sequences quantitation, which measures the absolute number of target molecules in a sample, thereby avoiding the dependence of comparison to relative amplification of a known standard sample. In ddPCR, a PCR sample (consists of template DNA, primers, fluorescence-quencher probe, and a PCR master mix) is partitioned into greater than 10,000 droplets. After amplification, the fluorescent droplets containing the target sequence are scored as positive and droplets without fluorescent signal are scored as negative. Poisson statistical analysis of the positive and negative droplets provides absolute quantification of the target sequence.

Does you have experience with experiments that use AAV? If yes, what type of studies?

Yes. We have worked with many AAV serotypes including AAV2, AAV3, AAV5, AAV6, AAV8, AAV-Ank80, and other novel serotypes. We also have experience in performing cell-based assays and in vivo animal studies.

Would you be able to use FACS (Flow cytometry) for assays using AAV vectors that express GFP?

Yes. We can assay for GFP expression using FACS. The Supplemental figure 1 in the below paper shows one of our studies using AAV-GFP in cells.