*The TARGATT™ HEK293 Master Cell Line is also suitable for building large mammalian cell libraries, with non-viral high-throughput library screens and fewer cell counts. It combines the scalability, affordability, and ease-of-use of bacterial/ yeast systems and the advantages of using mammalian cells (closer to human environment and post-translational modifications) for efficient and stable gene knockin into cell lines and for library generation.

The TARGATT™ integrase and the donor plasmid will be transfected into the TARGATT™ HEK293 Master cell line using well-optimized protocols to enable stable integration of the gene of interest into the cell line. 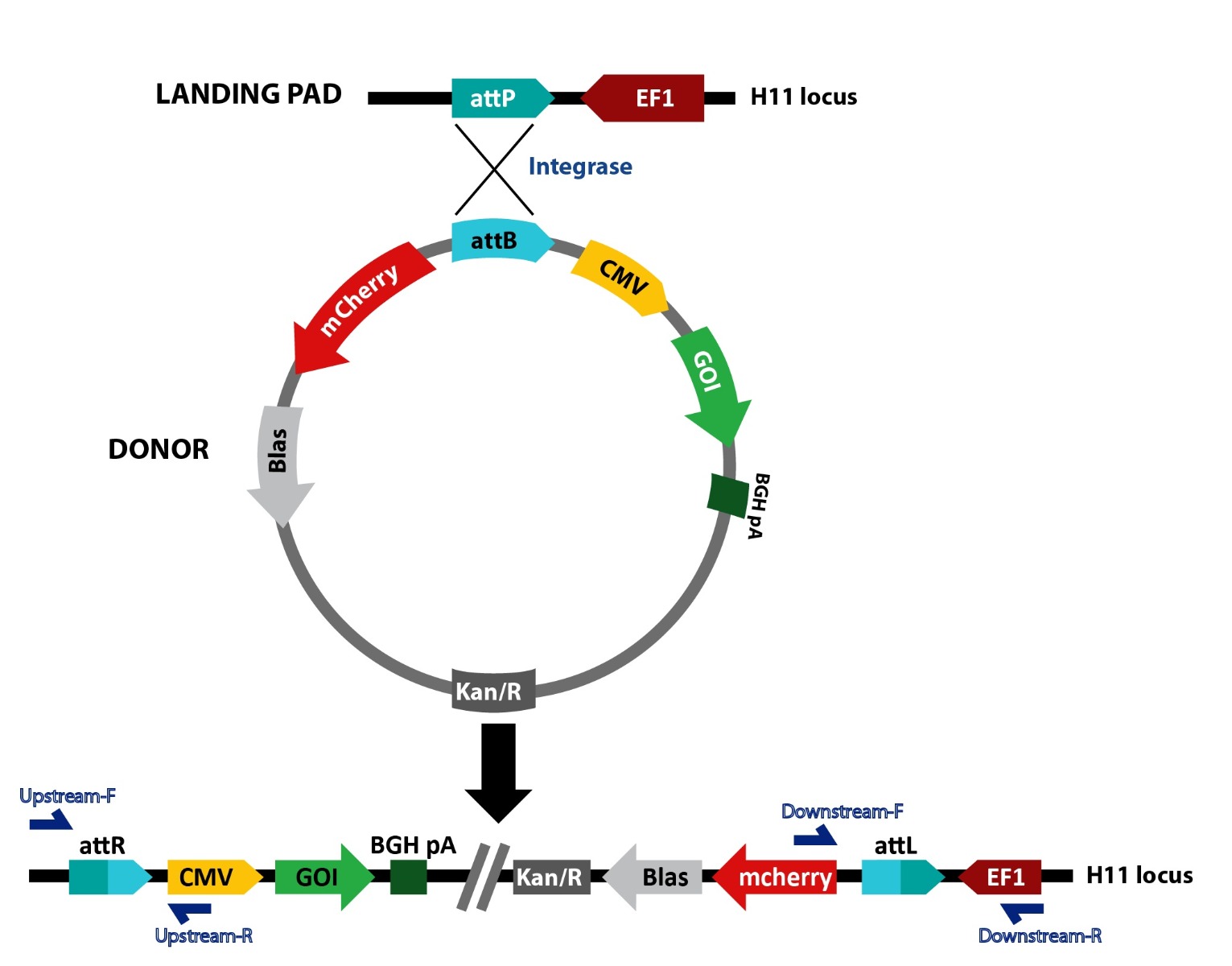 Figure 1. Schematic representation of TARGATT™ site-specific transgene integration mediated by integrase. The TARGATT™ HEK Master Cell Line was engineered with the attP landing pad at the hH11 safe harbor locus. The TARGATT™ plasmid containing the integrase recognition site, attB is used to clone the transgene. The integrase catalyzes an irreversible reaction between the attP site in the genome and attB site in the donor vector, resulting in integration of the gene of interest at the selected H11 locus. The cells containing the gene of interest can be enriched using the selection marker (gray box).

The TARGATT™ HEK293 Master cell line and integrase system enables site-specific and very efficient DNA integration (>40% without enrichment and ~90% with enrichment) without disruption of internal genes.

Figure 3. The mCherry integration into the TARGATT™ HEK293 master cell line. Left: Integration mediated by the integrase 72 hours post-transfection. Cells were transfected with the mCherry positive control plasmid and either the provided TARGATT™ integrase plasmid (+Integrase) or a mutant TARGATT™ integrase plasmid deficient for integration (-Integrase). The mCherry plasmid has no promoter and requires the ubiquitous EF1 promoter in the landing pad after integration to express the reporter gene. The integration efficiency of mCherry knockin into landing pad was >40%, without selection. Right:Blasticidin enrichment of TARGATT™ HEK293 cells with a knocked-in mCherry-blasticidin plasmid. Cell pools (with 20x and 40x split ratio) were enriched in selection medium for 3 weeks (without cell sorting). The enrichment of mCherry was about 90% after blasticidin selection.   Data represents the mean  SE of two representative experiments done in triplicates

A Knockin cell line is one in which a foreign gene or DNA fragment (transgene) is inserted into a cell line genome. These knockin cell lines make powerful research tools for various applications including reporter gene insertion, gene overexpression, and bioproduction. Traditionally, knockin cell lines were generated by random insertion of the foreign genes which carries with it several disadvantages including repeat-induced gene silencing, disruption of internal genes, and genomic instability. More recently, the CRISPR-Cas9 technology has become very popular and is widely used to engineer knockout and knockin cell lines. While CRISPR genome editing is very adaptable and versatile for the generation cell lines with a variety of genetic modifications in a site-specific manner and at a desired locus, it is not very efficient for the integration of large transgenes.

ASC’s TARGATT™ integrase technology is a very versatile gene knockin tool and it has been successfully adapted in cell lines, mouse, rat, pigs and rabbits models.

How does the TARGATT™ technology compare to CRISPR/Cas9 or nuclease-based technologies?

Nuclease-based genome engineering technologies such as TALENs, ZFNs and especially CRISPR/Cas9 have revolutionized biomedical research in the past decade. CRISPR/Cas9 genome editing is very adaptable and versatile enabling the generation of a cell line and animal models with a variety of genetic modifications such as gene knockout, knockin, conditional knockout, and more, in a site-specific manner and at a desired locus (genetic or safe harbor).

While the engineering of a landing is an additional step before gene integration, Applied StemCell has successfully generated “master” cell lines, mouse, rat, pig, and rabbit models and have successfully used them for transgenic cell line and animal modeling, for basic and applied research applications. We have several peer-reviewed journal publications citing the use of TARGATT™ technology for various applications. 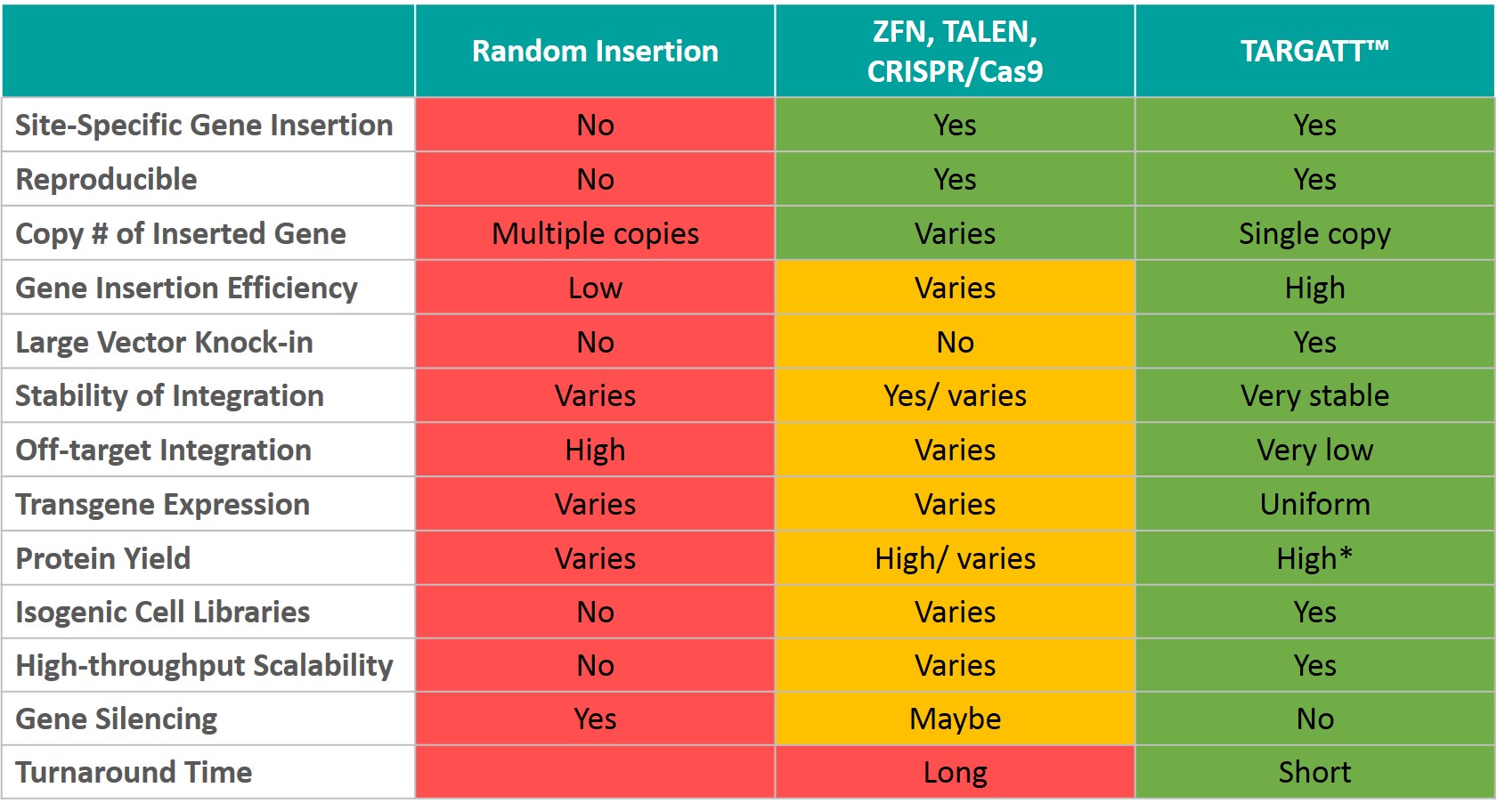