Genome engineering in induced pluripotent stem cells (iPSCs) offers the advantage of generating numerous cell line models in an isogenic background along with the parental cell line as an ideal control, where patient-derived primary cells are difficult to obtain. As well, genome editing to introduce and correct mutations in control and disease iPSC lines, is a powerful tool for comparative study of genetic mechanisms involved in cellular/organ development and disease pathology.

The true potential of the iPSC technology lies in the directed differentiation of iPSCs into a desired cell line lineage, especially into neuronal lineage cells as it provides a more predictive source of central nervous system (CNS) models. These cells are valuable tools for high throughput screening of neurotoxicological and neuroprotective compounds.

We also have disease-specific iPSC lines derived from patients with ALS8, Parkinson’s disease and Diabetes type II patient samples. Please inquire for details on differentiation of these genome-edited cell lines as well as custom differentiation services.

The ASE-9405 iPSC line is engineered with a bi-allelic (homozygous) knockout for APOE gene (APOE-/-) that has been implicated in Alzheimer’s disease etiology. The parental iPSC is ASE-9109 which is an integration-free, normal karyotype iPSC derived from male, CD34+ cord blood cells. The APOE knockout line can be further differentiated into an isogenic panel of neurons and glia for disease modeling and drug/ toxicity screening applications. 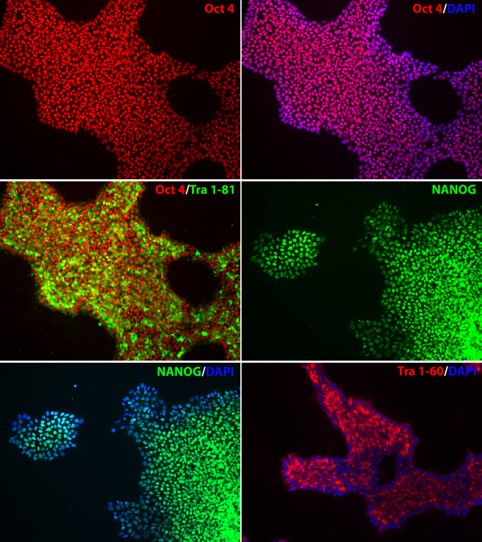 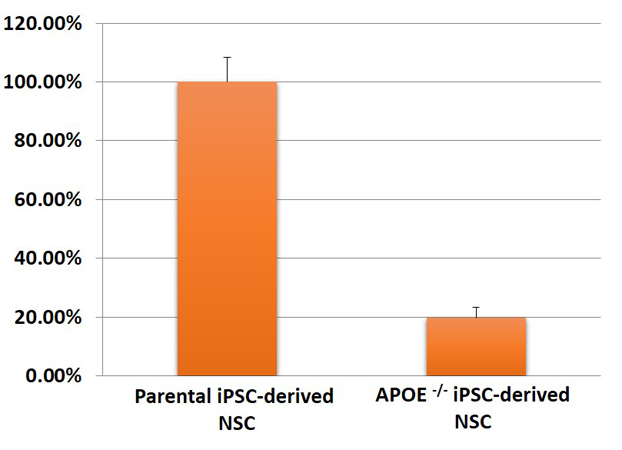 4. Differentiation of APOE -/- iPSCs into Neurons and GFAP

ASE-9502 iPSC line is a mono-allelic (heterozygous) knock-in iPSC line engineered with a GFP reporter tag driven by a neuronal-lineage-specific promoter, Doublecortin (DCX) inserted into the AAVS safe harbor locus. The parental iPSC is ASE-9109 which is an integration-free, normal karyotype iPSC derived from male, CD34+ cord blood cells. The AAVS-DCX-GFP Knock-in iPSC line can be further differentiated into an isogenic panel of neurons and glia for disease modeling and drug/ toxicity screening applications.

Figure 2. Validation of the DCXp-GFP reporter gene insertion in AAVS1 locus in iPSC line, ASE-9502.  In the AAVS-CAG-GFP master cell line, GFP expression is driven by the ubiquitous promoter, CAG (all cells are stained green for GFP). After RMCE, there is no GFP expression in the iPSCs confirming the absence of a ubiquitous CAG promoter after cassette exchange. When these iPSCs are differentiated into neurons, immunohistochemical characterization showed the co-localization (yellow) of GFP (green) and DCXp-positive neurons (red). The GFP is expressed only in neuronal cells confirming the insertion of the reporter gene in the correct locus.

FAQs
How specific is the GFP reporter driven by the DCXp promoter in the AAVS1-DCXp-GFP knock-in iPSC line?

Is the ASE-9045 APOE-/- iPSC line contain knockout of APOE4 or another isoform?