Applied StemCell utilizes its in-licensed CRISPR/Cas9 technology to generate mouse models with precise gene modifications such as knockout, knock-in and point mutation models for a variety of research and preclinical applications.

Products and Services
Let our Experts Create a Cell Line for You!
Viewing 1-4 of 4 products
per page
Support Materials

Three major factors influence the efficiency of CRISPR/Cas9 in mouse models: the concentrations of Cas9 mRNA,  gRNA and donor DNA. Each of these factors are interdependent which in turn affects three other intedependent parameters: the nuclease-mediated cutting rate, gene modification efficiency and birth rate of the pups. 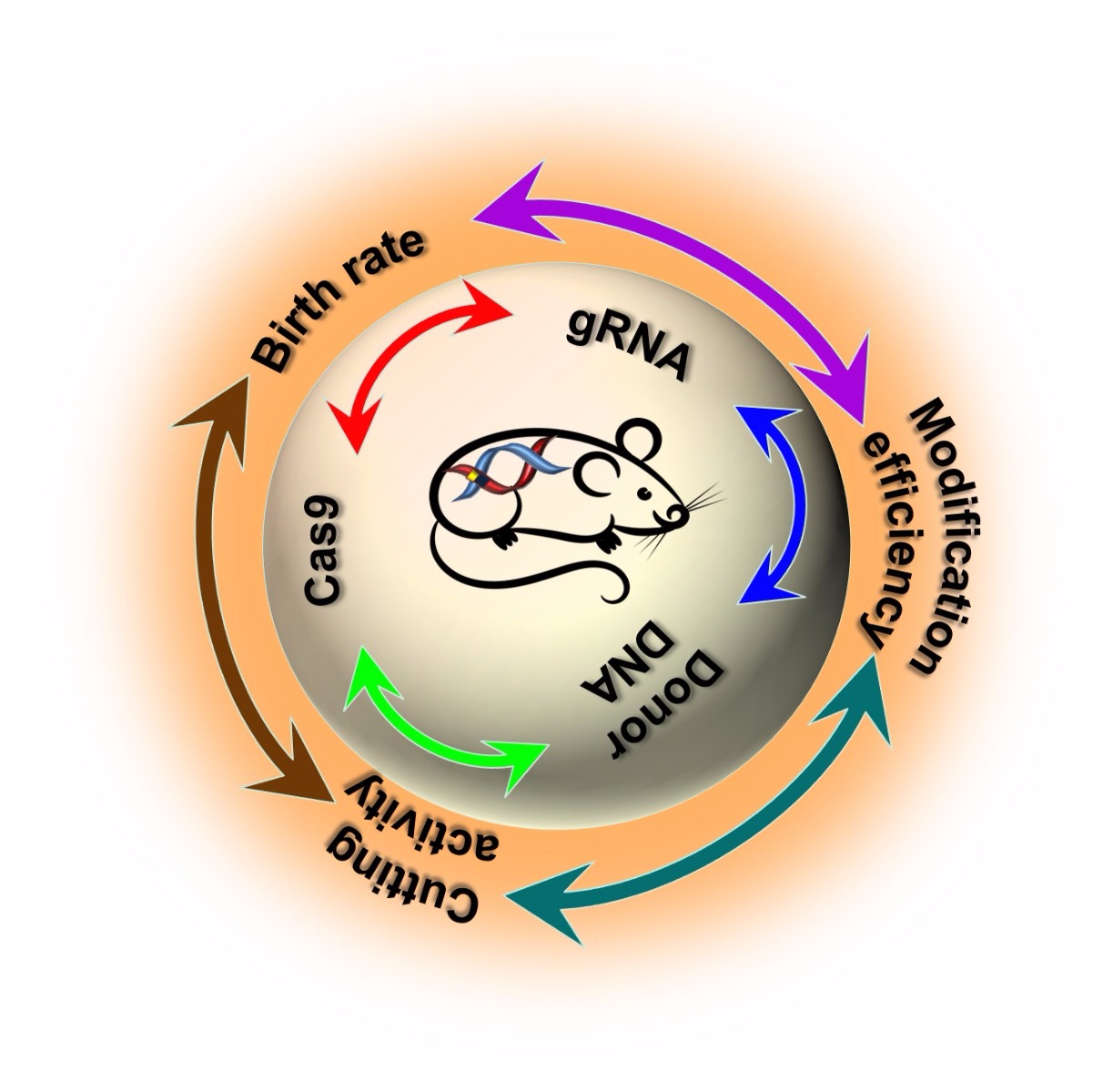 With increasing donor DNA concentration, the gene editing efficiency of CRISPR system increases but birth rate decreases. An optimal donor concentration of 200 ng/µl is recommended for microinjection in mouse embryos.

A technical limitation of ssODN is its length. Most commercial vendors can manufacture up to 200 bases of single stranded DNA molecule. Therefore, homologous regions for a ssODN can be shortenend if insert size gets bigger. The system is perfect for point mutation insertions and can accomodate small fragment inserts up to 100 bp.

Distance between 2 cutting sites must be > 3kb 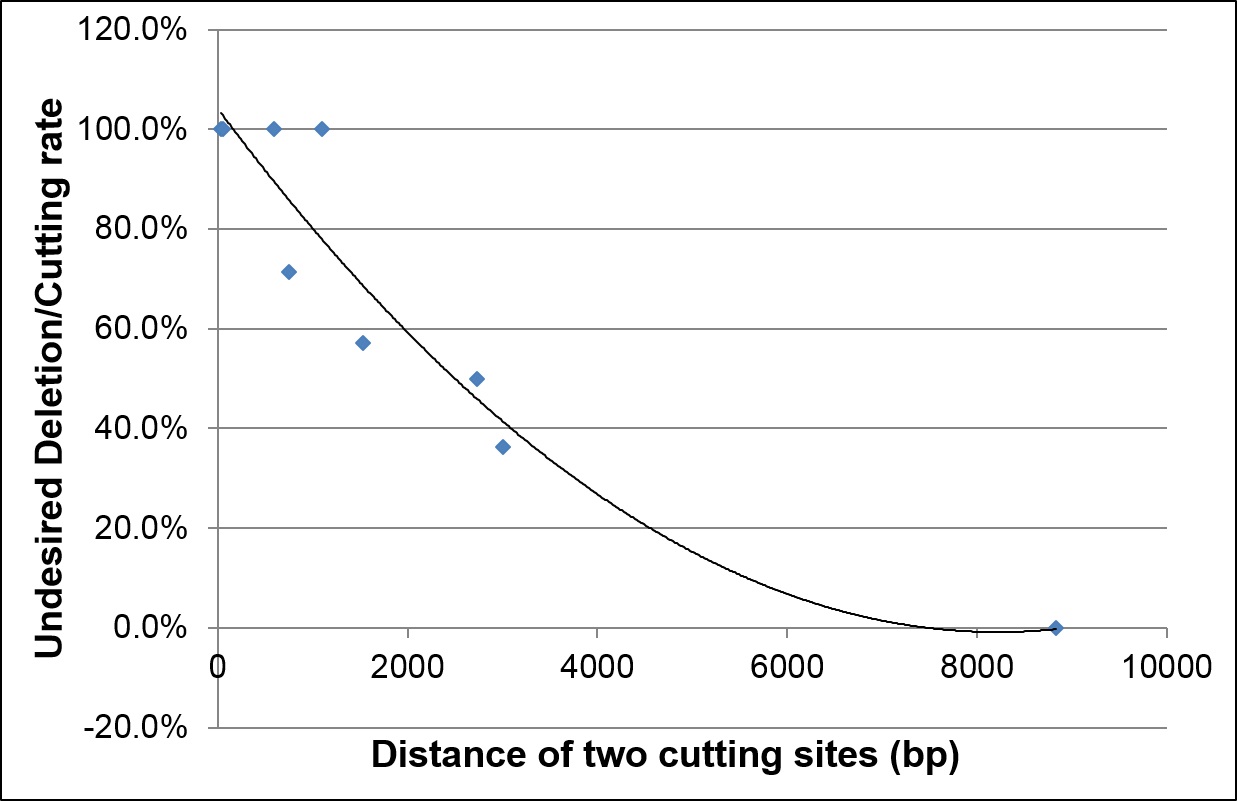 FAQs
What is the efficiency of CRISPR-Cas9 technology as compared to TARGATT™ and random transgenesis?

How many embryos are microinjected for validation of gRNAs?

We inject 50 embryos for in vivo validation of gRNAs.

What is the correlation between cutting in the embryo test (in vivo gRNA validation) and the final mouse?

The Cas9 cutting in the test embyros are 80-90% reflective in final pups born.

Which technology is suitable for inserting a gene of interest with GFP or Cre-ERT?

Some examples of available genetic modifications in mice include but not limited to:

Leverage our extensive scientific expertise in CRISPR/Cas9 and other complementary genome editing technologies such as our proprietary TARGATT™ site-specific knock-in technology and traditional homologous recombination methods in generating a mouse model specific unique to your research niche.

Goal: To insert a 2 kb large fragment DNA (gene of interest) at “a specified locus” in the mouse genome using CRISPR/Cas9.

The project was designed using a well optimized protocol to generate the transgenic mice: (1) Cas9 mRNA and gRNA were produced by in vitro transcription; (2) donor vector was constructed by in-fusion method: the plasmid contained 1 kb long 5’ and 1 kb long 3’ homologous arms flanking the gene of interest (2kb); (3) the mixture of Cas9 mRNA, gRNA and donor vector was microinjected into fertilized eggs of C57BL/6j mouse background.

Using a panel of genotyping primer pairs, three out of 31 pups born after microinjection (#15, 19, and 26) were identified as founders (F0), with the gene of interest inserted at the desired locus. 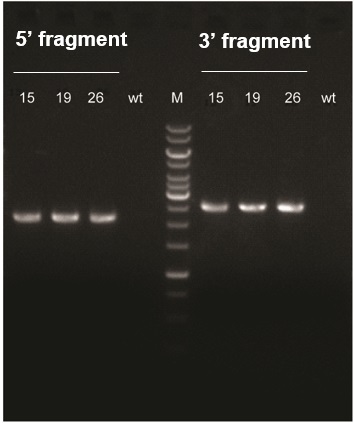 Goal: To delete a 587 bp fragment from a specific site in C57Bl/6 mouse genome using CRISPR

To achieve the model, three procedures were implemented. In the first step, a mixture of active guide RNA molecules (gRNAs) and qualified Cas-9 mRNA was injected into the cytoplasm of C57BL/6 embryo. The second step was to screen new mice born from the microinjection using PCR. And the third step was to confirm the positive animals by sequencing the modified region in the desired mouse locus.

Figure: Mice# 4, 5, 6, 8 were identified as F1 germline transmitted animals carrying the ~ 600 bp deletion. The lower band was extracted, purified and sequenced. The sequence results showed that the deletion removed the entire exon and was identical to parental sequence (not shown).

Case Study# 3: CRISPR Knock-out Model - Deletion of a ~100 bp fragment from exon of gene of interest

Goal: To delete a ~100 bp fragment from the N-terminus of the gene of interest in C57BL/6 mouse genome using CRISPR.

The mouse model required a ~ 100 bp DNA fragment to be deleted from the N-terminal of the gene of interest in order to cause a frame shift in downstream gene sequence, thereby leading to loss of protein. For this, we followed a well optimized protocol involving 3 steps: (1) a mixture containing active guide RNA molecules (gRNA) and qualified Cas-9 mRNA was injected into C57BL/6 (B6) embryos; (2) new mice born from the microinjection were screened by PCR; (3) potential positive animals were confirmed for the accurate sequence alterations by sequencing purified PCR products. 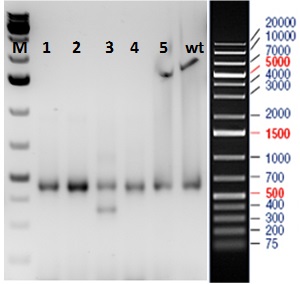 Figure: PCR amplification of exon region of F0 mice. Five mice born from the embryos microinjected with CRISPR cocktail were subjected to PCR amplification using genotyping primers. Mouse#3 was shown to carry a deletion fragment which was purified and sequenced.

Figure: Sequence alignment of wild type B6 mouse and founder mouse #3 showing deletion of the exon in the coding region(dark frame).

Five (#2, 5, 6 13 and 17) out of nineteen pups, 26%, were genotyped by restriction enzyme digest and sequencing to confirm the correct knock-in on one of the alleles (heterozygotes). A sequence with desired knock-in generated a different cutting pattern compared to its wild type counterpart.