Applied StemCell can generate custom conditional knockout rat models using CRISPR/Cas9 or other suitable gene-editing techniques to insert the 5’ and 3’ flanking LoxP sequences into the endogenous locus of your gene of interest. These conditional knockout rats can be bred with commercially available Cre expressing rats or custom-engineered Cre expressing rats to generate your rat model with precise control over where and when your gene is knocked out.

Gene knockout animal models are extremely important for studying functional importance of genes and the role played by gene dysfunction due to deletions of mutations in specific diseases. While conventional knockout models where gene expression is disrupted at germline level can be a very valuable research tool, constitutive knockout of some critical genes can pose problems such as embryonic lethality, undesired phenotypes and compensatory mechanisms. Conditional Knockout rat models overcome these limitations and offer a refined and versatile approach to study gene dysfunction by limiting the disruption of gene expression to a particular tissue or a specific developmental time of the animal.

One of the most used conditional knockout method is the Cre- LoxP system, in which a gene of interest (targeted exons) is flanked by two 34-bp LoxP sequences (also called floxed alleles) at the desired genomic locus (figure 1). The LoxP sites serve as a target for the Cre-recombinase, which catalyzes deletion of the floxed exon(s) (figure 2). 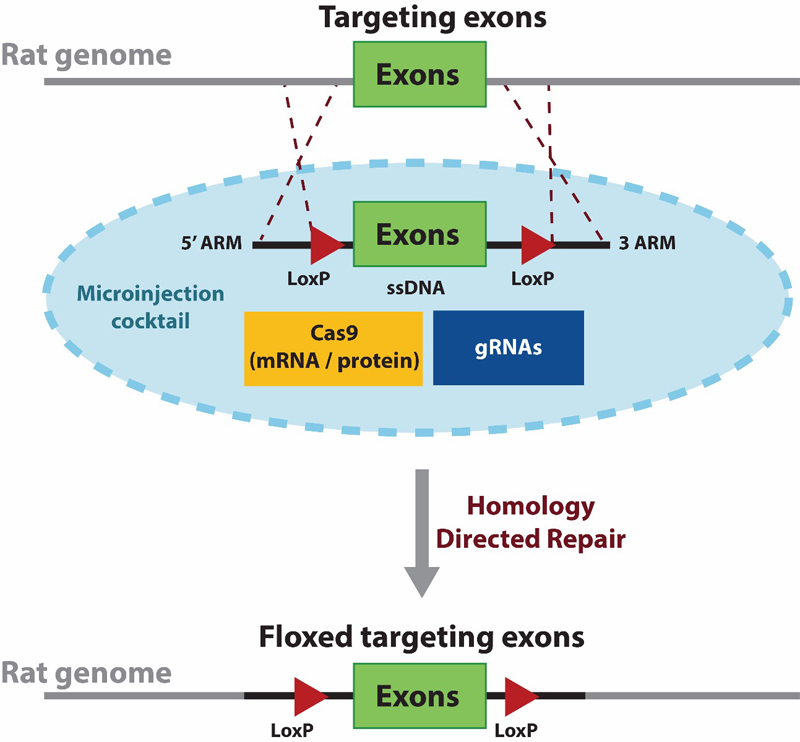 Figure 1. The schematic describes the first stage in developing a conditional knockout rat model CRISPR to generate a floxed (LoxP flanked exon) rat. A single stranded donor DNA (ssDNA) is used for delivering the floxed targeting exons to replace the wildtype form. The donor contains two LoxP sequences flanking the targeted exon(s) along with 5' and 3' homologous arms for directing a site-specific homology directed repair. The donor ssDNA is delivered along with Cas9 (mRNA or protein) and validated gRNAs via microinjection.

Figure 2. Crossbreeding the conditional knock-out rat with a Cre-recombinase expressing rat. The Cre expression is driven by a promoter of choice: tissue specific or ubiquitous promoter. As an example, a CNS-specific promoter is shown in the figure. The expressed Cre recombinase deletes the floxed exon(s) in a spatial specific manner there by causing a frame shift in downstream sequence.

Looking for a neuronal lineage-specific or other custom Cre Rat Line?

Applied StemCell can generate Cre Rat Lines using its proprietary TARGATT™ technology to suit your research needs. The TARGATT™ integrase-based site-specific gene integration technology is ideal for insertion of large transgenes into a preselected safe harbor locus such as rH11 or rRosa26. Using this technology, the Cre gene under the control of a promoter-of-choice can be inserted into the preselected safe harbor locus for high-level Cre expression in the desired tissue lineage. Some examples of Cre rat lines we can generate are below:

For other promoters, please inquire.